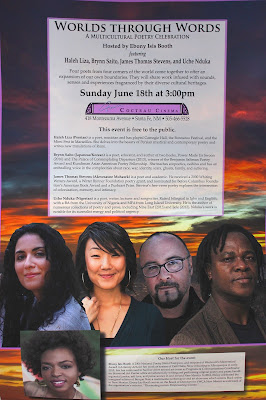 Date/Time: Sunday, June 18th (3-5:30pm)
Location: Jean Cocteau Cinema (418 Montezuma Ave., Santa Fe, NM)
Four poets from four of the corners of the world come together to offer an expansion of our own boundaries. Haleh Lize, Brynn Saito, Uche Nduka, and James Thomas Stevens will be sharing work infused with sounds, senses and experience fragranced by their diverse cultural heritages.
Each poet will read, followed by a Q&A and discussion with the audience, as well as a chance to meet and mingle with the poets and buy their books.
This event is free to the public.
Haleh Liza (Iranian/Persian) has toured through the US and Europe playing venues such as Carnegie Hall, the Bonnaroo Festival, UNC Chapel Hill, and the Mimi Fest in Marseilles with past projects Haale, The Mast, and Sabila Sabila. Her poems have been published by Columbia University Press and Rattapallax Press and she has recited her poems at the MET, the Fetzer Institute's Gathering for Love and Forgiveness in Assisi, Italy, and at Verses of Hope hosted by Brainpickings and the Academy of American Poets.
https://www.halehliza.com/
Brynn Saito (Japanese/Korean) is the author of two books of poetry, Power Made Us Swoon (2016) and The Palace of Contemplating Departure (2013), winner of the Benjamin Saltman Poetry Award from Red Hen Press and finalist for the Northern California Book Award. She also co-authored, with Traci Brimhall, Bright Power, Dark Peace, a chapbook of poetry from Diode Editions. Her poetry has been anthologized by Helen Vendler and Ishmael Reed; it has also appeared in the New York Times Sunday Magazine, Poetry Northwest, and Virginia Quarterly Review, among other journals. She is the recipient of a Kundiman Asian American Poetry Fellowship, the Poets 11 award from the San Francisco Public Library, and the Key West Literary Seminar’s Scotti Merrill Memorial Award.
http://brynnsaito.com/
Uche Nduka (Nigerian) is the author of numerous collections of poetry and prose, including Nine East (2013), Ijele (2012), and eel on reef (2007), all of which were published after he arrived in the United States. Earlier collections include Heart’s Field (2005); If Only the Night (2002); Chiaroscuro (1997), which won the Association of Nigerian Authors Poetry Prize; The Bremen Poems (1995); Second Act (1994); and Flower Child (1988). Belltime Letters (2000) is a collection of prose.
https://www.poetryfoundation.org/poems-and-poe…/…/uche-nduka
James Aronhiótas Stevens (Akwesasne Mohawk) received a 2000 Whiting Writers Award, a Witter Bynner Foundation poetry grant, the Kim Ann Arstark Memorial Prize in Poetry, and the City of Santa Fe Writer’s Award. Nominated for the Before Columbus Foundation’s American Book Award and a Pushcart Prize. He was a 2005 finalist for the National Poetry Series. His work has been included in several anthologies, including Eating Fire, Tasting Blood: Breaking the Great Silence of the American Indian Holocaust (2006, edited by MariJo Moore), Poetry and Pedagogy: The Challenge of the Contemporary (2006, edited by Joan Retallack and Juliana Spahr), and Visit Teepee Town: Native Writing after the Detours (1999, edited by Diane Glancy and Mark Nowak). Stevens has taught at Haskell Indian Nations University, the Institute of American Indian Arts, and SUNY Fredonia.
https://www.poetryfoundation.org/…/det…/james-thomas-stevens
Ebony Isis Booth is a 2006 National Poetry Slam Champion, and recipient of Westword’s Mastermind Award in Literary Arts for her work as hostess of Café Nuba; Ebony Isis Booth is committed to her work. Since relocating to Albuquerque in early 2015, Isis has continued to fuel her drive toward art-ivism as Programs & Communications Coordinator for Harwood Art Center while simultaneously writing and performing original poetry and prose; heralding social justice, self love, and perseverance in and around New Mexico. In 2016, Ebony celebrated the inaugural edition of Burque Noir, a multimedia performance and art showcase which centers Black artists in New Mexico. Ebony Isis Booth serves on the Board of Directors for YWCA New Mexico as a steward of the organization’s mission, “Eliminating racism. Empowering women.”
Posted by wayne william berninger at 25.5.17 No comments: 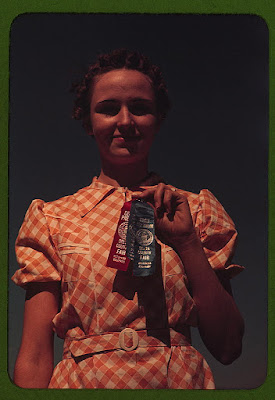 Beginning this year, the ceremony will be a joint event for the whole Humanities Division.


Congratulations to the following English majors and graduate students who completed their degrees this academic year.