Click the image to see a larger version of the flyer for this event: 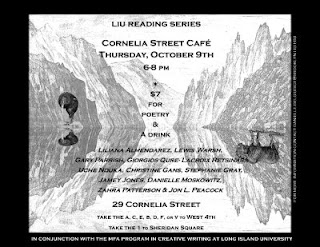 Posted by wayne william berninger at 30.9.08 No comments:

Please join us in commemorating the life of Gerald E. Silveira. Dean Silveira was a beloved teacher and respected colleague and a member of the Brooklyn Campus community for over 50 years. The special celebration will include a Fountain dedication, followed by performances in the Kumble Theater by the American Ballet Theater and other artists.

Posted by wayne william berninger at 8.9.08 No comments:

This event was supposed to be Wednesday, September 17, but a conflict has arisen, so the new date/time is as follows...

Please come and meet the new students in the MA and MFA programs (16 this semester plus 1 readmit!), ask questions of the Chair, meet faculty, and generally eat pizza, drink beer, and celebrate the beginning of the new school year together. This event is informal and fun.

The Department of English of Long Island University's Brooklyn Campus & The MFA Program in Creative Writing cordially invite you to attend...

STARTING FROM PAUMANOK
the Annual Reading and Talk on American Literature and Culture.

This year's Lecture will be given by...

(Walter Mosley will be introduced by Jessica Hagedorn)

The event is free and open to the public. Seating is limited and reservations are required.

Co-sponsored by the Provost's Office, the English Department, the Creative Writing MFA program, and Voices of the Rainbow reading series, this event is supported by grants from the Mellon Foundation and Long Island University's John P. McGrath Fund

WALTER MOSLEY is the author of twenty-nine critically acclaimed books which have been translated into twenty-one languages. His popular mysteries featuring Easy Rawlins began with Devil in a Blue Dress in 1990. Others in the series include A Red Death, White Butterfly, Black Betty, and A Little Yellow Dog (both of which were New York Times bestsellers). Recently, Easy Rawlins has returned in Bad Boy Brawly Brown, Six Easy Pieces, Little Scarlet and Cinnamon Kiss, a 2006 New York Times bestseller.

Mosley has written five works of literary fiction: RL's Dream; Always Outnumbered, Always Outgunned; Walkin' the Dog; The Man in My Basement and Fortunate Son; three works of science fiction, Blue Light, Futureland and The Wave; and four works of nonfiction, Workin' on the Chain Gang, What Next, Life out of Context, and This Year You Write Your Novel. Two movies have been made from his work: Devil in A Blue Dress, starring Denzel Washington and Always Outnumbered, starring Laurence Fishburne.

He has been the recipient of numerous awards and honors, including a Grammy Award, the O'Henry Award, the Sundance Institute Risktaker Award for his creative and activist efforts, and the Anisfield Wolf Award, an honor given to works that increase the appreciation and understanding of race in America.

Mosley created, along with The City College, a new Publishing Degree Program aimed at young urban residents. It is the only such program in the country. Born and raised in Los Angeles, he now lives in Brooklyn.

Posted by wayne william berninger at 3.9.08 No comments:

The following are the readings scheduled for this semester. More detailed announcements will appear right before each event, but mark your calendars now!

Walter Mosley is one of America's best-loved writers. He is the author of such mysteries as Devil in a Blue Dress, Black Betty, Blonde Faith, and Fearless Jones. He will be making the annual Paumanok Lecture on American Literature.

Program co-sponsored by the Provost's Office, the English Department, the Creative Writing MFA program, and Voices of the Rainbow.

Gary Shteyngart was born in the Soviet Union. He is the author of the satiric novels The Russian Debutante's Handbook and Absurdistan, chosen as one of the New York Times' best books of 2006.

Marie-Elena Jones, a native of Antigua, is author of the novel Unburnable, "a love story, a murder mystery, a multigenerational epic, and a reinterpretation of Black history."

Just in time for the Christmas season, we will be presenting a one-man performance of Charles Dickens' The Chimes, a witty, ironic and poignant short novel exposing how the rich think the poor ought to live. Performed by actor/author David Houston, who has appeared in leading roles in scores of plays and musicals.

Posted by wayne william berninger at 1.9.08 No comments: