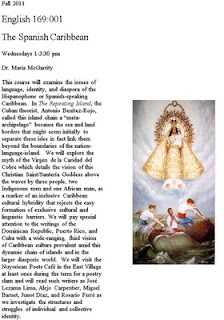 Posted by wayne william berninger at 5.7.11 No comments:

In March, we posted descriptions of advanced undergraduate courses being offered in Summer 2011 and Fall 2011. See here.

In that brochure, Professor Patrick Horrigan's English 180, Graphic Literature, is described as follows:

Some of the most entertaining and powerful stories today are being told through the medium of comics—the artful blending of words and pictures on the page. Comic books aren’t just for kids anymore. In fact, books of “graphic literature,” as they are sometimes called, include everything from the adventures of Batman to the memoirs of Holocaust survivors. They might be funny or terrifying, action-packed or deeply psychological, explosively colorful or cool black and white. They might take place in the past, present, or future, on planet Earth or someplace you’ve never heard of before.

This course will sample the rich body of graphic literature since the mid-twentieth-century with an emphasis on work from the last two decades. Our goal will be to experience the pleasures and challenges of a medium that combines text and image. We’ll get a sense of the literature’s characteristic themes and ways of seeing the world, and we’ll develop an understanding of what makes the medium of comics distinct from other verbal and visual media, including film.

Throughout the semester, students will write a series of short essays as well as a longer piece that may take the form of a research paper or a creative project.

Professor Horrigan has produced a great flyer to advertise the course. 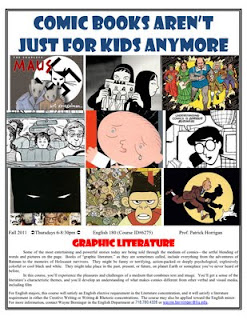 Posted by wayne william berninger at 2.7.11 No comments: