Our Condolences to Akilah Oliver's Friends and Family

We are saddened to hear of the death of Akilah Oliver, who was a 2008 Visiting Writer to the Creative Writing MFA Program. 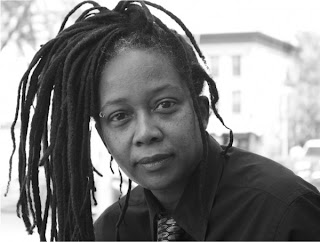 Posted by wayne william berninger at 24.2.11 No comments:

Please join us for "Reading vs. Google: Teaching Reading in the New Millennium," the first of the semester's series of the Writing Program's Conversations: Reading, Writing, Research.

Professors Patricia Stephens and Deborah Mutnick (both of the English Department will be leading a discussion about how to engage students in reading beyond Google.

Click image to see larger version of flyer for this event. 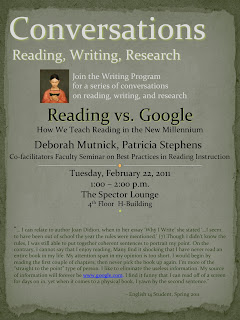 Posted by wayne william berninger at 16.2.11 No comments:

In celebration of MAKE: A literary magazine "at play" and TAKE THE HANDLES -- a make out party between two magazines.

Posted by wayne william berninger at 16.2.11 No comments:

Stephanie will be showing eleven of her Super-8 short films, including the premiere of her fresh-from-print Satanic Bible on Interlibrary Loan. A few of them will be projected with live narration by the artist.

Microscope Gallery is at 4 Charles Place (near Myrtle & Bushwick Avenues in the Bushwick section of Brooklyn). A short walk from the Myrtle/Broadway JMZ stop or the Morgan or Jefferson L stops. www.microscopegallery.com 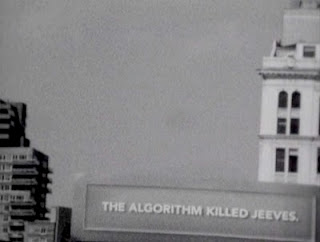 Stephanie Gray is a NYC-based experimental filmmaker and poet who has received a New York Foundation for the Arts Fellowship in Film, New York State Council on the Arts Distribution Grant, and an Experimental Television Center Finishing Fund Grant. Her work has been featured in one-woman screenings/readings at the Poetry Project, the MIX NYC Lesbian & Gay Experimental Film Fest at Collective Unconscious, Millennium Film Workshop, and Massachusetts College of Art. Her films have been shown among others at the Ann Arbor Film Fest, CinemaTexas, Nashville Film Fest, Oberhausen (Germany), Viennale (Austria), Antimatter (Canada), Chicago Underground Film Festival. Her first poetry collection was published in December of 2007, titled Heart Stoner Bingo (Straw Gate Books).

Posted by wayne william berninger at 13.2.11 No comments:

Sigma Tau Delta members Lisa Huang, Robin Renahan, Jessica Roelant, and Ralph Tolbert will be presenting papers at the 2011 Annual Convention to be held in Pittsburgh, 25-27 March.
Posted by wayne william berninger at 12.2.11 No comments:

Professor Harriet Malinowitz (English Department) will be speaking at the 2011 Conference on College Composition and Communication (CCCC), the theme of which is "All Our Relations: Contested Space, Contested Knowledge" and which will run from April 6-9 this year in Atlanta, Georgia.

Malinowitz will be presenting along with Charles Schuster (of the University of Wisconsin-Milwaukee) and Sondra Perl (of the CUNY Grad Center), in a session entitled "The Stories We Tell: Opening the Doors of Our Classrooms." The session will be held from 12:30 PM to 1:45 PM on Friday, April 08, 2011. According to the session description, "Three experienced members of the profession will take the audience inside their classrooms by providing rich descriptions of classroom life, focusing specifically on theories and practices of writing groups." Malinowitz's presentation will be entitled "The Full-Class Writing Workshop."

From the CCCC press release: "Each year the CCCC Convention draws college faculty members from around the world. They gather to hear award-winning keynote speakers, attend presentations by colleagues on the latest innovations in education, and network to gain knowledge of best practices in the field."

Posted by wayne william berninger at 9.2.11 No comments:

Drop By the English-Department Table at the Major/Minor Fair

The Office of Student Development and Retention is hosting a Major/Minor Fair.The purpose of this event is for students to learn about the different majors and minors at the Brooklyn Campus and to talk with faculty, advisors and majors from various departments.

Click the following images to see larger versions of the flyers for this event. 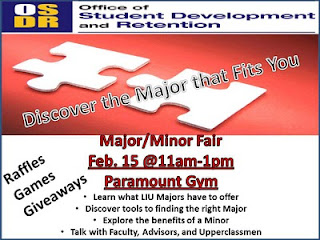 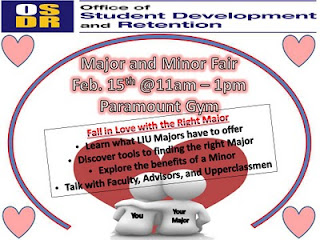 Representatives from the English Department WILL be at the Major/Minor Fair!

Please drop by and find out more about the English major and minor programs.
Tuesday, February 15th
11 AM to 1 PM
Paramount Gym.
We look forward to meeting you!
Posted by wayne william berninger at 9.2.11 No comments:

This semester (Spring 2011), Professor Sealy Gilles (Co-Chair, English) is teaching English 643 (a graduate seminar on Shakespeare).
On Thursdays, from 5:15-6:30, in the Spector Lounge (Humanities Building, 4th Floor), the seminar screens video versions of the plays they are reading/discussing.
For example, on Thursday, 2/10, is the second half (roughly) of Richard II starring Derek Jacobi.
All graduate students in
English are welcome to attend, but please note this caveat from Professor Gilles: "We will be jumping around a bit in the films as we focus on scenes that interest/puzzle us so we can’t guarantee a linear experience."

No need to RSVP and you are welcome to drop in and out.
Professor Gilles thanks Laurel Schumacher for spearheading this series.
The following is the course description for this semester's section of English 643.
ENG 643 Seminar in British Literature [Shakespeare] (Course ID# 6941)
William Shakespeare’s work is both daunting, in its scope and complexity, and an inescapable part of our cultural and literary landscape. This seminar aims in part to set the bard and his work in context by taking a look at the plays as they emerge from early modern London, a city undergoing exponential growth and beset by turmoil. By 1600, London was fast becoming Europe’s most populous city and the theaters provided its crowds with dynamic and unsettling entertainment. Much of that entertainment reflected contemporary anxieties about the vicissitudes of the human body. As we work to understand the Shakespearean stage as an urban art form, we will also be delve into the plays to explore the language of disease, the volatile presence of racial outsiders, and the constant rewriting of gender.
The seminar will be centered on six plays – two comedies, two history plays, and two tragedies. I have ordered tickets for two performances at Theater for a New Audience: Cymbeline with the Fiasco Theater Company & MacBeth, starring John Douglas Thompson (whom you may have seen in Othello last year). Both shows are on Thursday nights and we will be applying for funds to subsidize student tickets.
Course projects will include:
• A close reading of a passage or scene OR an original Shakespearean soliloquy or dialogue with a metatext linking it to passages in the plays
• A recitation of a passage from the plays.
• A research project that places a play in context: historical, critical, political, religious, or cultural OR an extended dramatic script using research on early modern London.

Posted by wayne william berninger at 9.2.11 No comments:

Directions: L train to Jefferson, exit, walking along Wyckoff to Troutman. Walk up (north) on Troutman two blocks, passing St. Nicholas and Cypress, to a large brick building on the left. Regina Rex is in suite #329

Jesse Seldess recently relocated to Brooklyn from Karlsruhe, Germany. He is the author of two books, Who Opens (Kenning Editions, 2006) and Left Having (Kenning Editions, forthcoming), as well as chapbooks on Hand Held Editions, Instance Press, Answer Tag Press, and the Chicago Poetry Project Press. His work has recently appeared in the journals EOAGH, Jacket, Little Red Leaves, and out of nothing. Since 2001, he has edited and published Antennae (www.antennae-journal.com), a journal of experimental writing and language-based performance and music scores.

Lewis Warsh is author of numerous books of poetry, fiction and autobiography. Most recently, A Place in the Sun (2010), Inseperable: Poems 1995-2005 (2008), Ted's Favorite Skirt (2002) and The Origin of the World (2001). He is co-editor of The Angel Hair Anthology (2001), editor and publisher of United Artists Books, and director of the MFA program in creative writing at Long Island University in Brooklyn.

Anne-E. Wood's work has appeared in journals like Tin House, New Letters, Agni, Gargoyle, Other Voices, The Chicago Quarterly Review, and The Cream City Review, among others. She is the author of the collection Two if By Sea (Fourteen Hills Press) and is currently at work on a novel. She lives in Brooklyn and teaches writing at Rutgers University and The Gotham Writers' Workshop.

Matvei Yankelevich is the author of Boris by the Sea (Octopus Books), and several chapbooks. His translations of Daniil Kharms were collected in Today I Wrote Nothing: The Selected Writings of Daniil Kharms (Ardis/Overlook) He teaches at Columbia University School of the Arts (Writing Division), and the Milton Avery Graduate School of the Arts at Bard College. At Ugly Duckling Presse, he designs and/or edits many and various books, is the editor of the Eastern European Poets Series, and a co-editor of 6×6. He lives in Brooklyn.

Merche Blasco formed Burbuja as a vehicle for her own musical exploration. Since its conception she has composed music to accompany the sculptures of Lucy Orta at the Venice biennale, collaborated with Chick's on Speed and composed soundtracks for videos & installations by the artists of FABRICA (Italy) and HANGAR (Barcelona) establishing a strong relationship between different mediums and her own musical direction. Burbuja's performances have been presented in SONAR, MAPPING Festival and Sonic Circuits in Washington. For the last year Burbuja has been enormously enriched by the musician Maitane Beaumont and, for this performance, they will present a special project together.

Posted by wayne william berninger at 7.2.11 No comments: 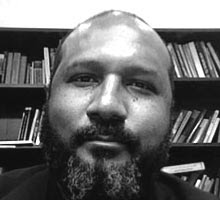 Sponsored by Africana Studies Program and The Philosophy Department with the help of the English Department and the Provost’s Office.

This course centers on philosophy professor Dr. Lewis Gordon’s formulation, “Thinking While Black,” which is both a declaration and a question. Foregrounding the work of revolutionary/writer/philosopher/psychiatrist Franz Fanon, Dr. Gordon ponders whether it is indeed possible to think while black given that blackness is often associated with adolescence and/or criminality in dominant discourses. Prof. Gordon also deliberates over the political and aesthetic implications and consequences of such an action (thinking while black). Dr. Gordon’s journey takes him from existential thought established by Jean-Paul Sartre through the world of W.E.B. DuBois, Richard Wright, Hip Hop and the Blues. Course requirements include attendance and participation at a film viewing and discussion of the satirical mockumentary, Fear of a Black Hat, at which time we will respond to the query, “Can a rapper be a revolutionary,” followed by an open class with Dr. Gordon anchored by his three articles: “Must Revolutionaries Sing the Blues,” When I Was There, It Was Not,” and “The Problem of Maturity in Hip-Hop.” The day concludes with a lecture by Dr. Gordon. Participants must produce a five-page typed paper based on the readings and discussion by March 30, 2011.

Requirements: Attend each event, read and prepare three articles in advance, write a five-page paper based on readings and the discussion generated at the events.

Biography: Dr. Lewis Gordon holds a B.A. from Lehman College and an MA, M Phil and PhD from Yale. Currently he is Laura H. Carnell Professor of Philosophy at Temple University and a visiting professor at the University of the West Indies at Mona, Jamaica. He is also Temple’s Director of the Institute for the Study of Race and Social Thought. He has written extensively on Africana Philosophy, highlighting especially the intellectual contributions of Franz Fanon, Richard Wright, The Blues, Jean-Paul Sartre, and W.E.B. Du Bois. Other major areas of expertise include black existentialism, theology, Afro-Jewish Studies and postcolonial phenomenology. Bad Faith and Antiblack Racism (1995/1999), Her Majesty’s Other Children: Sketches of Racism from a Neocolonial Age (1997), and Existence in Black: An Anthology of Black Existential Philosophy (ed, 1997) are but a few of his published works.

Posted by wayne william berninger at 2.2.11 No comments: