Valzhana Mort is a poet from Belarus known for her vibrant poetry readings. She is author of the first bilingual Belarusian-English poetry book ever published in the US, Factory of Tears (2008).

Ha Jin, a native of China, is the author of fiction, poetry, and prose. His writings include Waiting (a National Book Award Winner in 1999), War Trash (PEN/Faulkner Award 2005), A Free Life, and The Writer as Migrant. His latest work is a collection of short stories, A Good Life.

Sapphire is a poet and fiction writer. He works include American Dreams, Black Wings & Blind Angels, and the best-selling novel Push, about a brutalized Harlem teenager. Push, winner of many awards, was made into the major motion picture, Precious: Based on the Novel Push by Sapphire.

Russian-born author Gary Shteyngart has written the award winning novels The Russian Debutante’s Handbook, Absurdistan, and Super Sad True Love Story. In 2010, he was named as one of the New Yorker magazine’s 20 best fiction writers under 40.

Korean-American author Sonya Chung has written the critically acclaimed novel, Long for This World. She teaches at Columbia University.

Celebrate some of the talent of LIU’s own adjunct faculty and MFA program.

Harryette Mullen’s poetry is filled with wordplay and allusion as well as being centered in the wider tradition of African American literature. Recyclopedia, which collects three of her earlier volumes, received a PEN Beyond Margins Award in 2006. She is also a recent winner of the Jackson Prize from Poets & Writers and has been nominated for a National Book Award. This reading is being given in conjunction with two other readings in New York the same week, one at Poets House and one at Cave Canem. The Poets-House reading is part of a celebration of the publication of Looking Up Harryette Mullen: Interviews on Sleeping With the Dictionary and Other Works by Barbara Henning (Professor Emerita in the LIU Brooklyn English Department). For more information about the other two readings, click here and scroll down to April 29 and 30.

ALL READINGS ARE FREE AND OPEN TO THE PUBLIC.

LOCATIONS ON CAMPUS TO BE ANNOUNCED.

For more information contact Louis Parascandola or Maria McGarrity at 718 488-1050.

Funding provided by the Provost’s Office.

Posted by wayne william berninger at 21.12.10 No comments:

We are pleased to announce a late entry in this semester's MFA Reading Series.

See here for info on past events from this semester.

The New Event is a Poetry Reading Featuring:

Refreshments following the reading.
Posted by wayne william berninger at 13.12.10 No comments:

Our First Video: The English Major at the Brooklyn Campus of Long Island University

We are pleased to unveil our first promotional video! Enjoy!

Posted by wayne william berninger at 13.12.10 No comments: 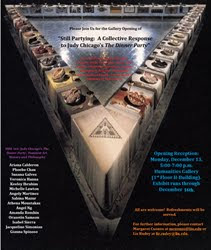 From the Brookln-Campus press release:

Setting their own place at the table, students at Long Island University’s Brooklyn Campus will honor Judy Chicago’s iconic work, “The Dinner Party,” at an exhibition that celebrates important women in history, Dec. 13-16.

Styled after Chicago’s feminist masterpiece, the exhibition features artwork by 15 honors students who took the interdisciplinary course “Judy Chicago’s The Dinner Party: Feminist Art, History and Philosophy,” taught by Brooklyn Campus associate professor of philosophy Margaret Cuonzo and professor of art Liz Rudey. The course ends with its own “Dinner Party” in which the ceramics, needlework and written components of the course are all shared.

This exhibition will be up for four days only (December 13-16). Don't miss it!

Posted by wayne william berninger at 9.12.10 No comments: 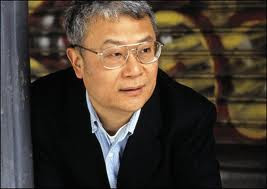 In connection with the English Department's annual Paumanok Lecture on American Literature and Culture, which will be given on March 10 by Ha Jin, we are offering this one-credit course on Ha Jin's work.

Ha Jin, born in China, is a poet, fiction writer, and essayist. He was a member of the People's Liberation Army before coming to the United States in 1986. He is the author of such works as A Good Fall (about the Chinese immigrant experience in America), Waiting (winner of the National Book Award and based on his five-year service in the communist Chinese army), and War Trash (winner of the PEN Faulkner Award). He is currently Professor of English at Boston University. 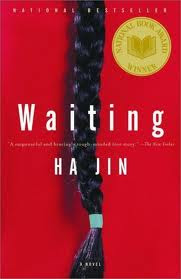 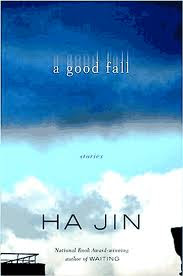 February 24: Discussion of stories from A Good Fall

Course Requirements: Students will be required to come to all four classes, do the assigned readings, and to write a 2-page report on Ha Jin's March-10 talk and a 6-8 page paper on his writings.

If you have any questions, please feel free to contact Louis Parascandola via email at louis.parascandola@liu.edu or by phone at 718-488-1050.

Posted by wayne william berninger at 3.12.10 No comments: