"The Importance of Africana Studies Programs"

will be given by Dr. Yvonne Seon. 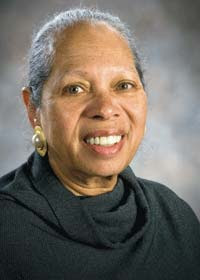 Dr. Yvonne Seon is a renowned and respected innovator and administrator of Africana studies programs. She earned a B.A. degree from Allegheny University and an M.A. degree in American government and politics as a Woodrow Wilson Fellow at American University. After living and working in the Congo shortly after its independence in 1961, Dr. Seon continued her studies at Union Institute, where she earned perhaps the first doctorate in African and African-American studies, a program she helped design. Dr. Seon is the founding director of the Bolinga Black Cultural Resources Center at Wright State University, where she returned in 2005 to serve as Distinguished Visiting Director. She was again appointed to direct the program in 2006, the same year she retired as Professor of African-American Studies in the History Department at Prince George’s Community College, Largo, Maryland. Dr. Seon has also taught black studies at University of Maryland at College Park, Wilberforce University, and Howard University. While raising three children, she earned an M.Div. from Howard University Divinity School and was the first African-American woman ordained as a Unitarian Universalist minister. Deeply committed to others, Dr. Seon is on the Board of Directors of Africare, a private voluntary organization specializing in African development. She recently wrote Totem Games, a poetic exploration of her search for African identity.

Posted by wayne william berninger at 28.1.08

Email ThisBlogThis!Share to TwitterShare to FacebookShare to Pinterest
tags: Paumanok